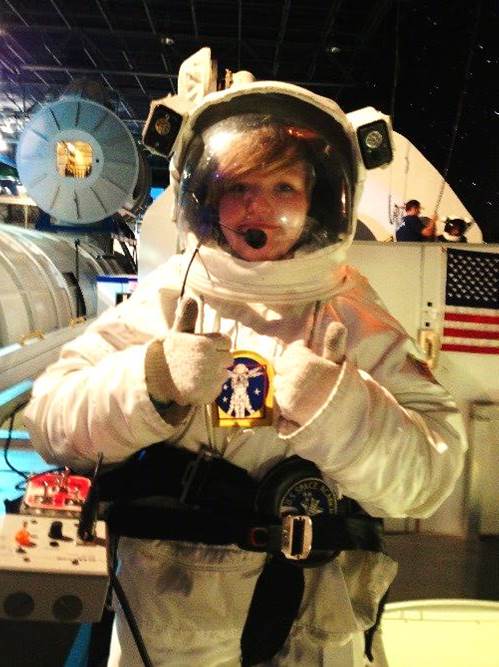 Meet Sam-Western Ohio’s Space Mission Specialist. How did Sam go from being an Ambassador Girl Scout in Fostoria, Ohio to a confident Space Camp Alumni? We’re so glad you asked! It all started with a little girl whose mother put Sam in Girl Scouts so she’d overcome her shyness and have fun. Then years of troop adventures, friendships formed, and confidence building trips and activities went by and Sam was ready for a challenge: a Girl Scout Destinations trip. These trips are for individual girls through GSUSA and require girls to apply for the trip, be accepted from the applicant pool, and raise the funds for the trip.

Looking over the list of trips Sam decided that Advanced Space Academy: Mission Specialist was just her style.  After all who could resist a chance to take a space walk to repair a satellite, command the I.S.S., and test their skill at the bottom of the Underwater Astronaut Trainer (UAT) during a SCUBA session? Sam worked diligently polishing her application, meeting the deadline, and was chosen from a large pool of applicants for Space Academy.

The next challenge was payment. Sam put her nose to the grindstone during the Fall and Cookie sales to set and meet goals. Sam earned $621 through the cookie sale that she could use towards her trip! She also applied for (and was awarded) a scholarship to help offset the cost. After months of diligent money earning, Sam’s efforts finally paid off: she had secured the necessary funds and was ready for her trip!

There were more challenges to come after Sam arrived at the U.S. Space & Rocket Center in Huntsville, Alabama. Was she scared? Yes. In her own words “the first day we got there it was pretty scary. I didn’t know where anything was or anyone there. We were just told to be at orientation by 2:30 and when you got there you sat in a huge room full of every one who was part of Space Academy and Advance Space Academy. You didn’t even know if the person sitting next to you was your team yet.” Practicing courage, Sam stuck it out and went to meet her team.

The next few challenges were mission related. Being a Mission Specialist meant Sam got to go scuba diving, climb a rock wall, and go out into the payload bay and fix a satellite. To do that she had to be harnessed in and hung from the ceiling in a superman position. Sam even conquered the Pamper Pole “aka the scariest thing I’ve ever done”. No idea what a Pamper Pole is?  Check out the guy in the video below!

Sam’s final challenge at Space Academy she called the “everyone dies mission” or EDM which actually stands for extended duration mission. During the mission the girls choose their job and work as a team to accomplish a goal. Sam managed to die seven times and kill everyone on her team at least once on accident. The girls did everything from being tricked into opening the door in the middle of launch to crashing and killing everyone. She says that while “we may have died A LOT, we had a lot of fun and we still worked well as a team“.

On her last evening they had a Girl Scout closing ceremony. Until then Sam hadn’t realized how many girls were there through destinations. She thought “it was really cool, we sang camp songs, traded swaps, then ended with a friendship circle”. Then it was time for graduation. All the girls wore flight suits and got to shake Robert “Hoot” Gibson’s hand and were welcomed into the family of Space Camp Alumni. Her team won the Outstanding Team award for always keeping a positive attitude and having fun. And just like that her grand journey was over! She’d overcome all the obstacles to get there, faced each challenge on the mission, and returned home a more confident and independent young woman.

But wait, Sam’s Girl Scout story isn’t over! Ready for a new challenge, Sam’s going on a different destinations trip this year. Given the courage and determination she showed at Space Academy, we can’t wait to hear about her next journey. So what destination will you try out? Don’t let challenges hold you back, Sam’s story proves it can be done!