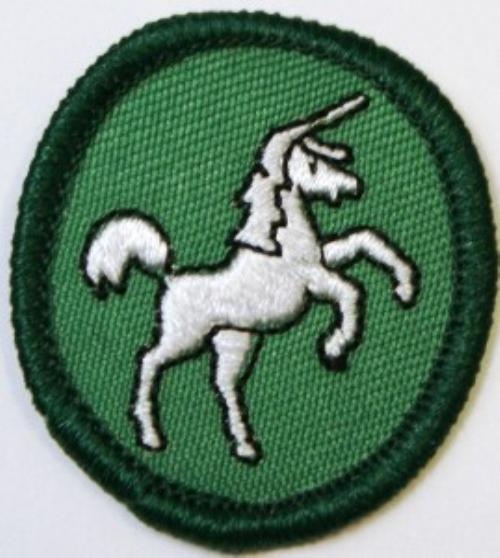 A herd of unicorns, a group of bees, and a couple of lightning bolts set off on a hike together…no, it’s not the beginning of a bad joke. It’s just another day at Girl Scout camp. What are we talking about? Why troop crests, of course! What are troop crests? These are a Girl Scout tradition, passed down from when Girl Scouts was new and leaders needed a way to easily identify girls belonging to different troops while on a hike or during an activity. Their solution was to choose a troop crest and display it proudly on sashes, flags, equipment and whatever else they could decorate! Over the years as the number of troops grew numbering troops became a necessity but troops still loved choosing their own troop crest and so it remained a cherished tradition. So does your troop have one? If not, here’s a few tips on when and how to choose a troop crest.

There are 16 official troop crests that can be purchased in the Girl Scout shop. When choosing one, troops should think of it sort of like a family crest, a special symbol that will represent what your Girl Scout family stands for or what the goal of your troop is. Are your girls always ready to march into action? Then you’re a natural Trumpet. Do they never stop moving? A Waterfall might be perfect for you! Check out the different meanings for each crest (found in the Girl’s Guide to Girl Scouting) and help the girls choose which one best fits your group. Remember it should have a special meaning to the girls, a common goal that bonds them together and that they can share with new members each year.

Do you remember your troop crest from your Girl Scout youth? If you do, share it with your girls and help them choose their own troop crest.  Let’s keep this wonderful tradition going with the next generation of Girl Scouts!