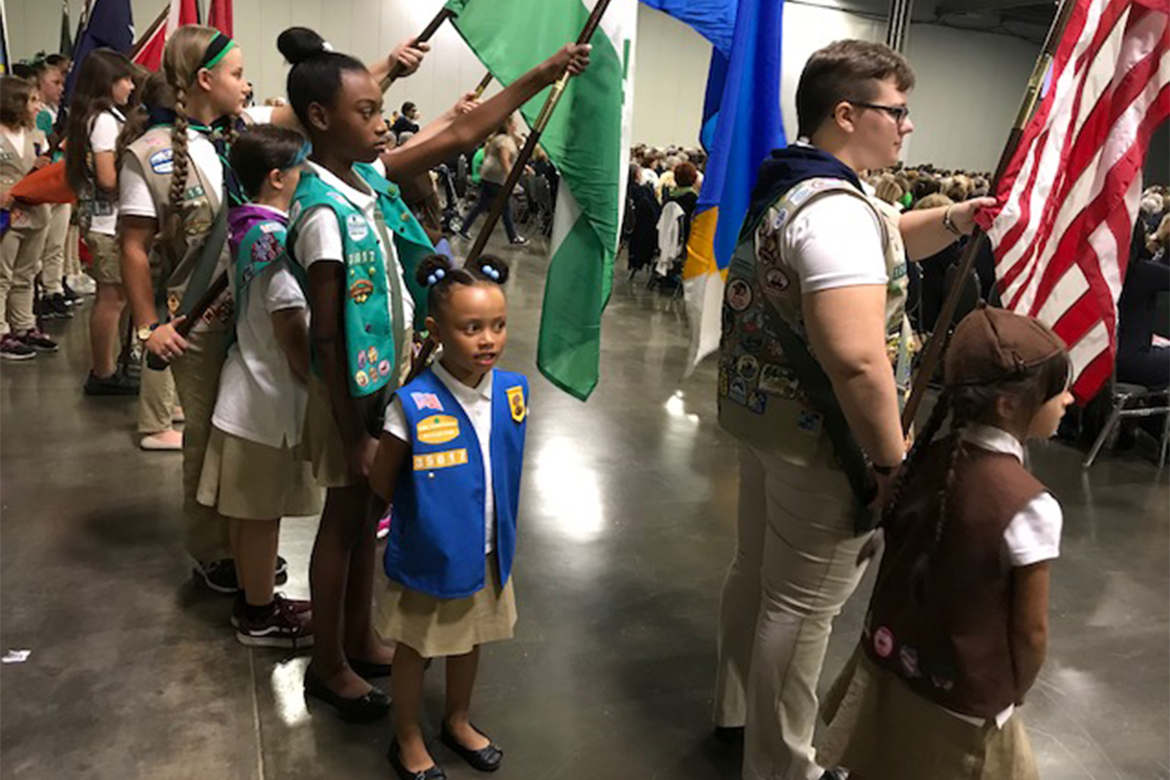 What’s your G.I.R.L. DNA? Are you a Go-Getter? An Innovator? A Risk Taker? A Leader? If you are a Girl Scout, you are probably a bit of each and on any given day, you are more one than another. The fact is, being a G.I.R.L. is in our DNA. This was never more apparent than at the G.I.R.L. 2017 National Convention. The convention kicked off on Wednesday, October 4 at an amazing Opening Ceremony with flags representing our nation, our movement world-wide, each of our fifty states, our nation’s territories, and those countries where Girl Scouts and Girl Guides find themselves making the world a better place. For a few minutes that evening, we were one as a nation, a movement, and G.I.R.L.s giving everything we have through courage, confidence, and character.

Daisies, Brownies, Juniors, and Cadettes from Springfield, OH participated in the Flag Ceremony. In preparation for this once-in-a-lifetime experience, the girls came together with over 200 other G.I.R.L.s throughout Ohio to learn about the flags they would carry. Throughout the afternoon, they discovered what their G.I.R.L. DNA really is. From the smallest Daisy who just began kindergarten this year to the oldest Cadette who came out of her shell, each one demonstrated leadership, independence, courage, and persistence. There is nothing more adorable than watching a 40 pound little girl carry a flag through a crowd of thousands with her head held high, her shoulders square, and with determined steps. And there is nothing that gives a leader, or parent, more pride than to watch her girl who used to not talk in public lead a group of girls through an entire afternoon of learning activities, games, and fun. The girls from Springfield who participated reflected on their experience during a fall camp the following week. When I asked them which part of G.I.R.L. do they most identify with, I received a resounding, “All of them, Ms. Shannon.” You can only imagine how proud I felt when Alexis, one of our Juniors in the troop, represented the voices of the others in telling me, “Ms. Shannon, we are go getters. We learn to innovate. You make us take risks, and one day I’m going to follow in your footsteps and be a leader.” It brought tears to my eyes to hear these words. This is what our movement, the Girl Scout Way, is all about.

A few hours on a midweek fall afternoon brought it all together for these young leaders who are more determined than ever to make the world a better place. Our girls know about the world, and they know about countries where Girl Scouts and Girl Guides come together in an all-girl environment to learn about themselves and others — but after a simple flag ceremony, these girls have a personal commitment to increasing their own leadership in the world and sticking up for those who do not have as much as they do. Now realize, Springfield is not the most economically advantaged community in western Ohio. Indeed, Springfield is a smaller metropolitan area that struggles to confront the challenges found in most large cities. In Springfield you find a stubborn grit in adversity that refuses to give up on the dream of a better life. The girls who come from Springfield are just like the girls you know. Some come from means and do not worry for the future, while others are spending parts of their days thinking about what they will cook for their siblings for dinner, and where the food is going to come from. Yet, in Girl Scouts, these young ladies come together on a level playing field as one unit — a troop — full of go-getters, innovators, risk takers, and leaders. Their annual household income has nothing to do with what they know they can achieve. The fact that their parents are not present in their homes does not influence what they know they can give back. What they know is that they, together as a troop, can achieve more than anyone will ever accomplish individually.

Carrying flags in the G.I.R.L. 2017 Opening Ceremony may have originally seemed like a great way to get out of school early. But the event proved to them that they can represent our nation, our movement, and the world in all that is good and just.

As a delegate at the National Convention Business Meeting, I was able to hold the pride I saw in my girls’ eyes on Wednesday evening close to my heart. At the business meeting, delegates are challenged to think about the Girl Scout Movement — where it has been and where it will go — over the next three years. Through long debates and parliamentary procedure, a delegate can quickly ask herself, “What am I doing here?” The answer is clear and quick — I’m representing the voices of hundreds of leaders and thousands of girls from western Ohio who are committed to making our world a better place. I’m representing the voices of these amazing people who are committed to building courage, confidence, and character in an environment focused on girls and led by girls. I am honored to have participated in G.I.R.L. 2017 from the very beginning of the first day until the end of the last. It was this opportunity that proved to me that the movement is strong, and the path our organization is on is right. You see, it’s in our DNA. We, alongside the girls we get to lead, are Go-Getters, Innovators, Risk Takers, and Leaders!