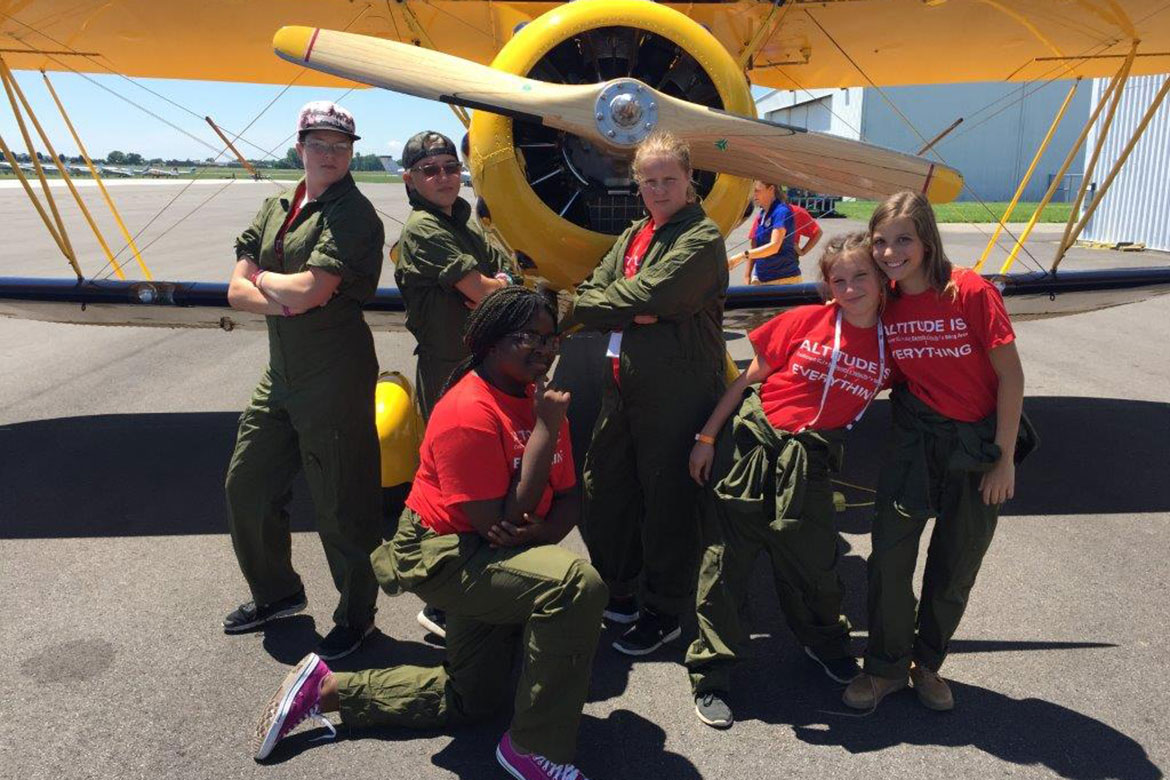 During my week at Camp Whip Poor Will from June 24-29, 2018 I participated in a partnership program with the Girl Scouts of Western Ohio and Air Camp Inc.  Myself and 37 other Girl Scouts from the Girl Scouts of Western Ohio participated. Each day we attended various programs and field trips all over the Dayton, OH area to learn new info that would prepare us for our ultimate end goal, Successful Flight!  This camp provided me an insight into a possible future career in the Aerospace Industry.

Day one when we got to camp, we did team building exercises to help build our team skills for our flight groups. As a flight group we did a human knot, and did name games.

On Monday we went to the National Museum of the US Air Force to learn about the physics of flight and do a little touring.

After the US Air Force museum we went to the Boonshoft Museum of Discovery, to learn about the different air currents and wind speeds in different parts of the world. After the wind speed and such we saw a short movie about if an asteroid really killed the dinosaurs. Then after Boonshoft we went back to camp and did more team building with painting a jet for our flight group.

Tuesday we headed to the Wright Patterson Air Force Base Research Laboratory to learn about what they do there and what it has to do with flying. After the laboratory we went to Sinclair Community College to fly airplane simulators and drones. We also learned how to navigate with the flight maps we were given.

Wednesday we went down to the Huffman Prairie and learned how the Wright Brothers set up their plane to test it.  We also built rockets and catapults to test and see who got the best results. After lunch we went to a Dayton Aviation Heritage National Historical Park The Wright-Dunbar Interpretive Center, where we did a scavenger hunt.  This is where we learned about the improvements the Wright Brothers made here in Ohio after their first flight in Kitty Hawk.

Thursday was our Flight day, the flight instructor I got was named Larry, he was pretty cool about things. We did a side slip and a zero-gravity maneuver which was similar to the feeling you get on a roller coaster. Then he let me fly the plane for a while, which was pretty fun. We even flew over Kings Island. After flying we worked on various stations to include taking apart an engine and putting it back together.  We then used a wind tunnel to fly small foam airplanes. After flying we ate lunch there at the Dayton Wright Brothers airport, and got to see a cool vintage taildragger airplane like the Wright Brothers flew.

Friday we did our flight navigation rescue mission and presented them to a board to be approved.  Afterwards was our graduation ceremony with our flight group alpha winning top flight award for the most points accumulated over the week.

The things we did during Air Camp taught us what might you do in a job that relates to aviation or STEM. After seeing what it was like to do the things we did that week as a job, I believe that I would want to do something that involves aviation later in life. I may even join the U.S. Air Force as a pilot.