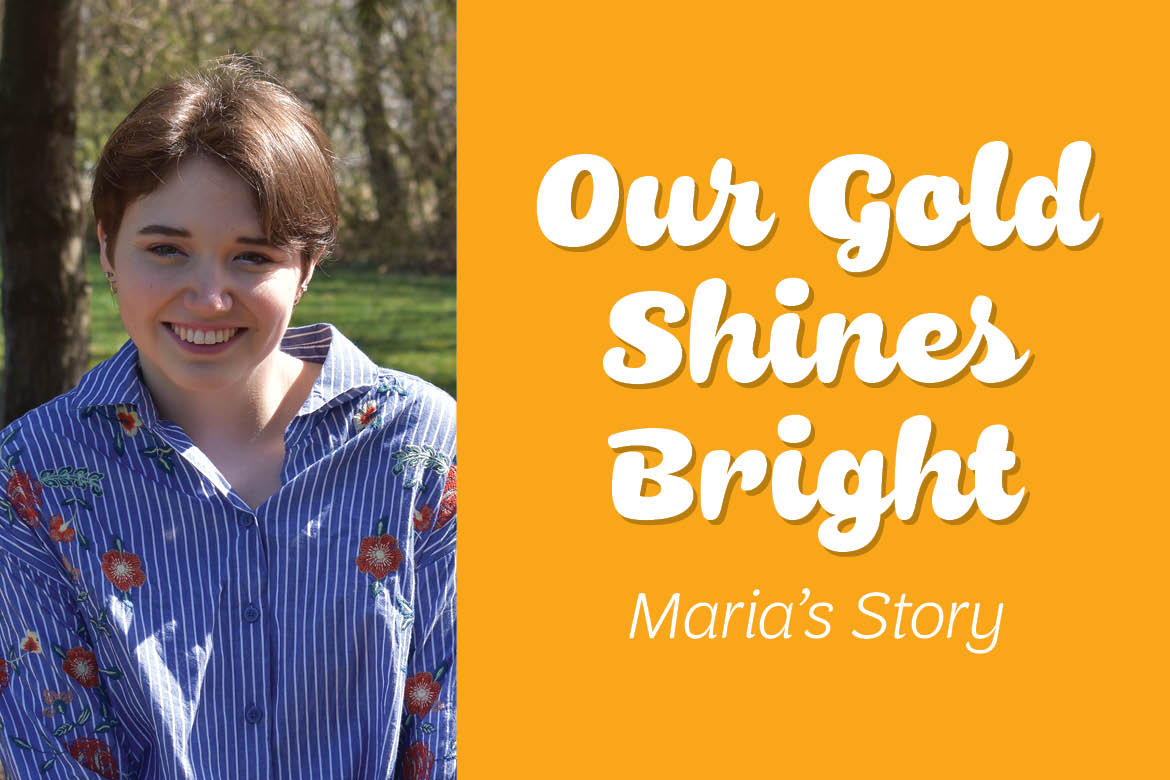 Maria is a graduate of Stephen T. Badin High school from Fairfield, OH. For her Gold Award project, entitled “Short Film to Combat Mental Health Stigma,” Maria self-directed a short film to help young people understand and relate to those with mental illnesses to help decrease the stigma associated with mental illness. Check out her inspiring story below!

I remember sitting at a Gold Award workshop when I was only in 7th grade and having my head rush me with ideas until my mind slowed down enough to grab one idea, focus in on it, and then go on to come up with more. My head has always been like this as long as I can remember; it’s always thinking, always creating, always making its presence known to me. This is both a curse and a blessing. I used my ever-thinking head to grow into a leader and co-lead the Special Events Committee at CSA (Cadettes, Seniors, Ambassadors). I loved doing brainstorming and sending paragraphs of ideas and thoughts to my co-partner, Nora. We held this leadership position for 4 years. When our time left in Girl Scouts began to dwindle, our leaders approached us about our Gold Award projects and asked what we wanted to do. I had about 3 ideas that had been popping up in my mind recently, all which involved writing or being creative. I finally decided that I wanted to make a film, since making films was something that I was passionate about and it gave me a chance to write, act, draw, and edit. I had no idea what I wanted to make my film about, though, as I sat and told my troop about this idea that I just knew I had to do. “What issues do you want to talk about? Yeah, what makes you passionate?” And just like that, my mind went out on a journey to scavenge up every argument, idea, or thing I saw that made my blood boil or made me feel like I had to do something.

As I normally do when faced with a predicament of decisions, I made a brainstorm list, which transformed into a Venn diagram, and then finally had a winner. There are a lot of things I am passionate about and a lot of things I want to see a change in the world for, but I was the most set on mental health, more specifically the mental health stigma. This includes things like those with poor mental health feeling ashamed to get help or those without mental illness labeling those who do as violent or crazy. I knew that this was most definitely the topic I wanted to focus on and so the script writing process began. I would sit writing scripts, and my brain that I speak so highly of would start to think and think and never stop until I closed my laptop and decided I wouldn’t ever write on that script again. I wrote 4 scripts until I was finally proud of one. But, proud was not really a good adjective, it was more like scared-proud (which I actually just made up and in my mind means that I was absolutely terrified of how people would like the script, but I was so proud of my accomplishments). My script, which I called my child a few too many times, contained all of the darkest parts of my mind from when I was at the lowest point in my life. Writing has always been a sanctuary for me and even back 2 years ago I would write everything I felt and thought I believed was true. I remember sitting at my desk reading these entries I had written and having a wave of pain and dark memories flush over my mind. Some days I would just write “I don’t know if I can do this anymore” or “I am upset.” But other days I would write paragraphs upon paragraphs of this pain and what was happening in my head, which I realized is one of the hardest things to do and got pretty good at it. It’s so hard to describe the pain and sadness in your head without using metaphors of waves or seas or flashlights dimming, but I would incorporate these into my mind and life so deeply that I could feel that pain I forgot the bruise of.

I never saw myself as a strong person, as I am someone who has appendages like sticks and who works in the library almost as quiet as myself, but as I sat there and read those words and felt that pain I felt two years ago, I realized I was strong. I sat up that night and wrote out an entire draft full of quotes from my old writing because if anyone was truly going to stop stigmatizing those with mental illness, they needed to feel that same bruise I carry around with me today. Those with mental illness may feel like they are insignificant or unwanted, but I told my story to show that no one is ever alone. There were a lot of people that struggled with mental illness that messaged me or told me that I was brave to tell my story and I was almost always thinking “no I wasn’t, but thanks.” Which sounds weird right now as I just talked about being scared of what people would think or how my anxiety-ridden brain never stops thinking, but I truly didn’t feel brave. I read my old writings and didn’t feel like I was brave to be creating this film like a soldier with a bruise coming out of war to go back in, but I felt like a bruised soldier who was ready to sit down and tell my story. I wasn’t scared, I would think back to myself in the battlefield of my mind and how scared I was to get out of bed everyday and think to myself that I was going to make this film for everyone who felt like me at one point, or still is, or hasn’t. I wanted this stigma of “mental health should not be spoken of” to disappear and for everyone to feel like things will get better no matter what. I may be bruised, I may still have bad days, and I may still never fully recover, but I want to keep talking about mental health because if we do, we could save and change so many lives.

I, like many, never realized just how many people are affected by mental illness, whether it be themselves or a family member. As I looked at statistics for my film, I always would find myself sitting at 3 a.m. with my mouth gaping open at the number of suicides with a main cause of mental illness and how they are going up each year. I would read blogs and posts about mental health and see how many people would say how they felt alone and scared to get help. It hurt to see all of these stats and posts, but I was given this strong amount of hope after my film, too. I received comments and messages about how a relative, friend, stranger, or classmate had watched my film and were reminded of themselves at some point and are now on a path to loving themselves and improved mental health. Or, I would receive messages/comments about how someone without experience with a mental illness had a loved one who was struggling and now they understood how to help and relate to what they were going through better. I truly believe if we all talk about our experiences, when we are ready, the world will begin to change and become a more accepting and understanding place. Mental health is important and should be talked about because “No one deserves to be in a battle alone, against themselves.”