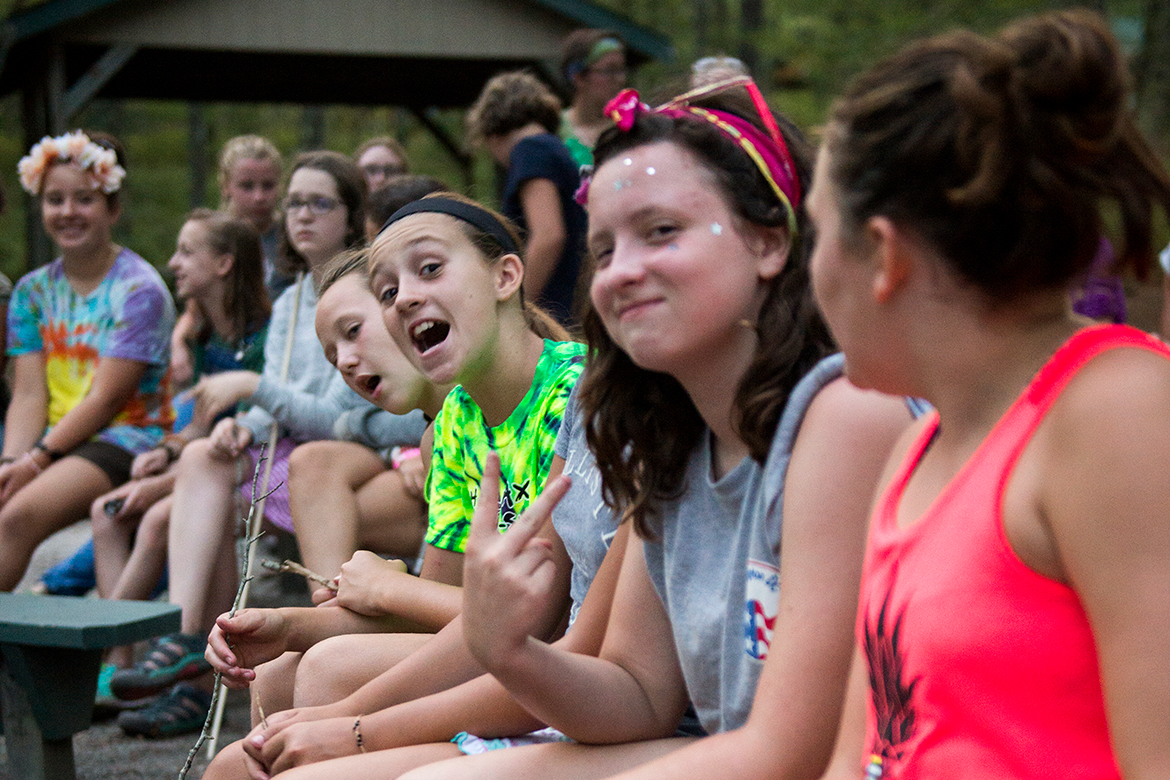 Progression and Bonding: Why This Troop Leader Recommends TAC

Why do I want to take my troop to TAC every year?

This is a question many leaders have asked me. Most say, “we did that once and we want to give our troop different opportunities each year.” First of all, that is what TAC is—a different opportunity each year. Second, we live in Franklin, just south of Dayton, and we go to Camp Libbey because it is a camp we don’t go to throughout the year and we love.

The first year my troop went to TAC they were first year Juniors. They did the rock wall, paintball slingshots, archery, swam, made new friends outside of the troop, and had a blast. They learned new songs, table games, new games, and came home with a new tie dye t-shirt.

The third year we went to TAC the girls were first year Cadettes and so excited to do the High Ropes Challenge course, until they got there. Three of them were psyched to do it, the other 13—not so much. Some of my girls said it was too high, too scary, and felt there was no way they can do it. Some were even ready to completely give up and go home right then or wanted to do something that was familiar and “safe.”

When they all started this negativity, the first thing through my head was “Oh no! I am going to traumatize these girls if I force them to try and what was I thinking? Last year was the first year that the majority of the troop made it up the rock wall, maybe I’m pushing too hard!”

One of my co-leaders volunteered to go up with someone first and help them through the course. She took one side of the rock wall and encouraged one of our girls who was enthusiastic until she got to the rock wall, and between my co-leader and our troop on the ground encouraging her and calming her, she made it to the top.

Next up, my daughter and her best friend. My daughter is a monkey, her best friend, not so much. My daughter who will scale the rock wall with another sister Girl Scout in record time went slow, helped her friend with where to put her feet, reminded her not to try and lift her body with her arms, but with her feet and legs, and they made it to the top. The rest of my troop watched this and said, “I can do this, I have to try or I will wonder if I ever could’ve made it.”

Two by two, my girls made it up the rock wall. We had one girl take almost 20 minutes to get up because she kept getting stuck at one spot and losing her grip, but she refused to give up and made it to the top of the wall. I had one girl say no way was she going to try the rock wall, but was one of the best cheerleaders ever from the ground, and two more that got so far and freaked out so we talked them down and they helped us encourage the rest.

Remember that first girl that got to the top with my co leader? Yeah, she wouldn’t get off the platform onto the ropes. My daughter went through the entire ropes portion and was ready to go down the zip line when the counselors and I realized that she is so comfortable up there that she could help the other girls. That’s just what she did. She went back to the platform and helped, encouraged, supported, and calmed down each and every one of them that needed it.

When my three other Girl Scouts got to the top of the rock wall, they helped their sister Girl Scouts to get around the course as well. Now here I am on the ground under the high ropes, and I am getting yelled at by some of the scared girls that they wanted to go home right now! or I want my mom, or you can’t make me finish this stupid course because I am too scared to move!

All I could think of was how proud I was of each and every one of these girls, but did I just traumatize them? Am I the worst leader on this planet because I am not fit enough to get up the rock wall and do it with them? How am I going to calm them down from here on the ground? Well… let me tell you, I didn’t have to do anything, but tell them to listen to their buddies and try to take a deep breath to calm down some. My troop took care of each other. They were the best!

Some of these girls showed compassion and leadership I have never seen from them before. Each and everyone of the girls who made it up the rock wall made it around the high ropes course and down the zip line. I gave each one a hug, told them how proud I was of them, and asked them if they were okay. They all gave me a hug back, looked up at the ropes and said, “I did that. I didn’t think I could, but I am glad I tried, and I want to do it again!”

As a leader my heart swelled up like the Grinch and I think I cried at one point. My “little” girls are growing up and believing in themselves, they are helping each other, they are realizing that the only thing stopping them is their fears and unwillingness to try.

I am happy to say that the girls voted to use their cookie money for a fourth year to go to TAC and do the high ropes course again, and there wasn’t nearly as much protest. Whenever someone said, “I can’t do this,” someone else reminded her that she already did do it, last year, so they knew she could do it again. When they got down from the challenge course, each one said she was glad she did it again and would do it all over again next year!

Every year at TAC, my troop chooses to do many of the same things, but as a leader I see them continue to grow and bond with one another. I am not as tired trying to get a fire ready for cooking, or hauling all the camp gear, food, and craft items. I get to enjoy the bonding with my girls, the staff, and other troops. I can sit back and watch as my troop reminisce about their day and how much fun this or that was and the girls from other troops they’ve met, and even ask me if we could do some things that those other troops have done. I look forward to our TAC trip every year because the staff is the best, my girls have a blast, and I don’t have to plan a thing.

I have been a Girl Scout for 21 years now, 13 as a girl and 8 as a leader, holding a number of roles in my service unit in those 8 years. I currently help my second year Daisies and second year Cadettes figure out what adventures we will go on each year and make their dreams come true. I feel truly blessed to be a part of an organization that helps me to be a better person and connects me with such a wonderful group of men and women. The biggest reward of all is to watch the spark in girls’ eyes when they have that “ah ha” moment, or accomplished something they never thought they could, or even to just watch them reassure, build up, help, and encourage each other.