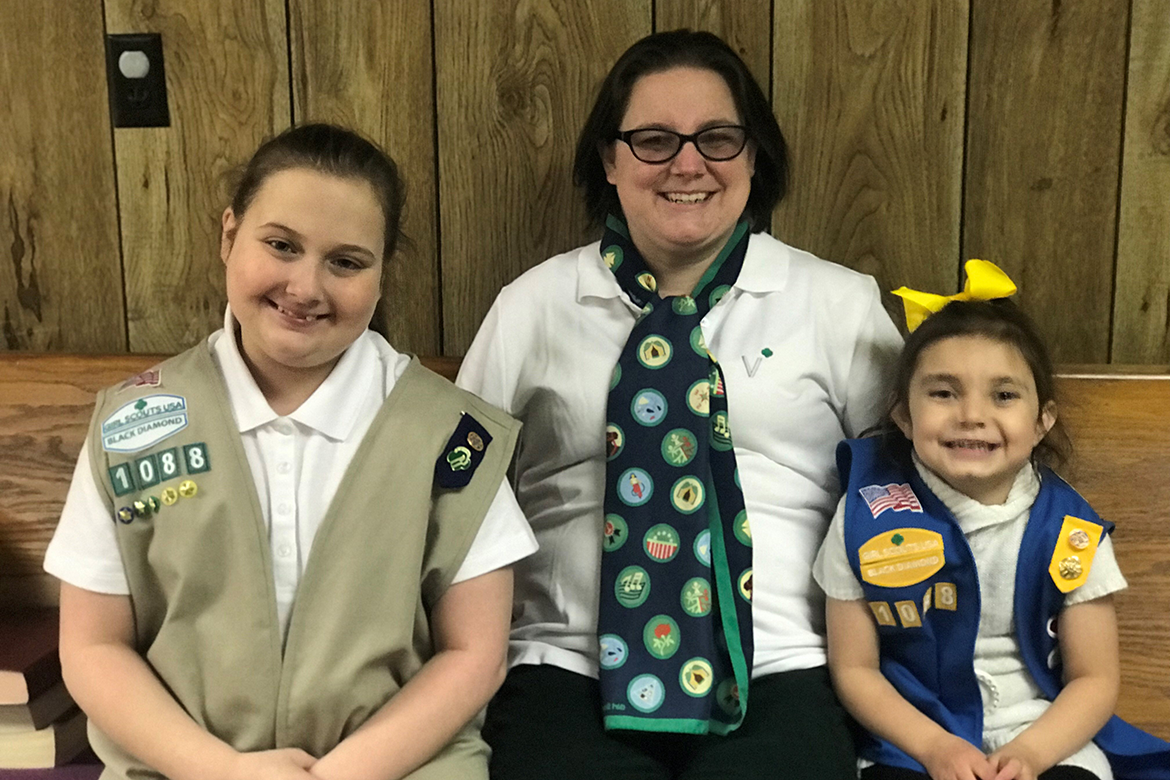 When I was in high school, I had a group of close knit friends who were in Girl Scouts. They had started together at a young age, and were working on their Gold Award when we were in High School. I loved hanging out with them—but I kept telling myself it was too late, or I was too busy to join. Boy, was I wrong!

Fast forward a couple of years. During my freshman year of college, my sister went and worked at a Girl Scout camp a few hours from our house. She told me I should work there the next summer. (It only made sense—as a college student studying to be a special education teacher, I needed something to do during the summers to make some money.) Without batting an eye (I think!) the camp director, Ariel, hired me!

I FELL IN LOVE with camp. Camp of any kind is STILL my favorite place in the entire world. That first summer, I had no idea that it would lead to five AMAZING summers.

I did just about everything at camp! Unit Counselor, Health Supervisor, Unit Leader, and Assistant Camp Director. I learned how to make a one match fire IN THE RAIN! Before that first summer, I pretty much stayed away from camp fires because I was scared of them. Now, that fresh campfire smell is one of my favorites! I jumped off a diving board (a HUGE fear of mine) and did a canoe tip test.

Throughout those five summers, I rock climbed, white water rafted, mountain biked, went caving, learned how to pitch a tent, became a huge fan of chocolate chip pancakes over a camp fire, and discovered the best part of camping in the canvas tents was on the nights it would rain. I determined that water was the fix for EVERYTHING, from a minor scrape or belly ache to an amputated leg (not really, but I got really good at saying “DRINK MORE WATER!”)

A few years after my last summer with the Girl Scouts of Western Ohio, I got married. My husband’s son was in Cub Scouts. His daughter was starting kindergarten. There were lots of little girls with nothing to do during their meetings. I immediately thought “Let’s start a Girl Scout Troop!” Now, I am in my 7th year of leading. My daughter is a Daisy and my step daughter is a Cadette. Although my girls come and go, I do have a steady set of 5-7 girls that have been with me almost the entire time. I use my knowledge of camp songs, skits, activities, and camp fire skills with them. I am getting ready to run my third day/partial week camp this summer.

In my classroom, I use some of the team building activities, I taught all the fifth graders the ENTIRE Baby Shark song…. not just the happy parts, and I’m even doing a camping theme math unit!

I just registered to be a Lifetime Member of GSUSA. I am honored to be a part of this organization, and I honestly don’t know if I would be a leader without having been Camp staff.

With that, I leave you one piece of advice—drink more water!