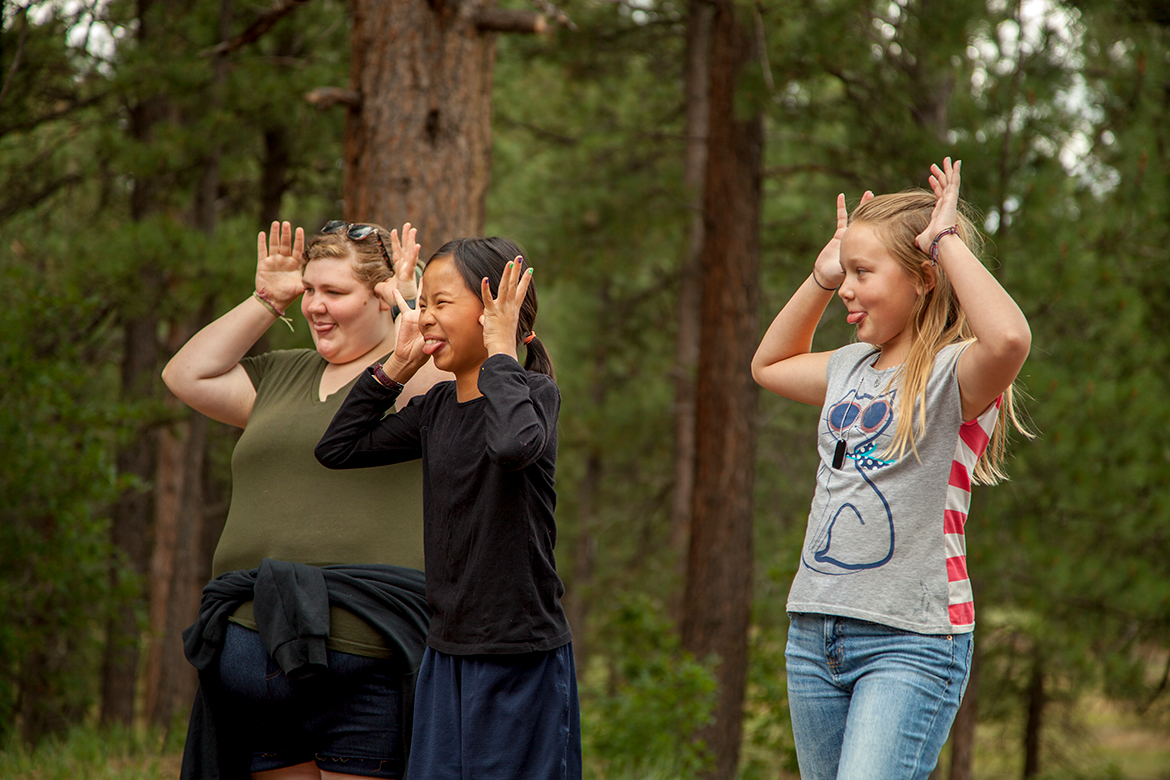 Camp season is coming, it’s practically here. And what’s the best part of camp? All the zany camp games, of course!

We’ve put together a list of our outdoor program team’s favorite camp games for you to play with your Girl Scouts. Try one (or try them all) as you dream of warmer winds and sunnier days at summer camp.

As the group gets faster add other things like a rabbit or anything else that the group comes up with to make the game more challenging!

Have the group sit in a circle. Pick someone to be the Frog Catcher and have them step out of the room. Once they are out of the room have everyone in the circle close their eyes and put their head down. An adult walks around the outside of the circle and taps one person on the head. The person tapped is the Frogger for that round.

If they are having trouble figuring it out, you can help with hints like “I am going through the green grass door and I am gonna take a kitten but not a cat with me or a puppy but not a dog or a roof but not a house.”

The solution: only things with double letters can be taken through the door.

Explain that Jamaquacks are rare birds from Australia. Being from down under, they always stand bent over, with their hands grasping their calves or ankles and shuffle along backward. They are nocturnal by preference and when they are out in daylight they walk around with their eyes closed. They are also always trying to escape their pen.

Split the group up, with a third of the players becoming Jamaquacks and have the rest form a Jamaquack pen by holding hands in a circle facing the center. Two players create a hole in the pen by dropping their hands.

Have the Jamaquacks gather in the middle of the pen, heads together and begin quacking and moving backward. Tell the Jamaquacks that the pen is set up and they must try to find a way out. Once someone gets out of the circle, tell them they are out, but they are still part of the group and must therefore remain a Jamaquack and they can help the others in any way a Jamaquack might help.

Couples stand spread out around a circle, with elbows hooked between them. One player is “it” and chases the rest. If they are caught, roles reverse as in tag. The person who is “it” can get out for a break by hooking elbows with one of the couples, creating a trio, forcing the person on the opposite end of the trio to now become “it”.

The game involves two types of people. One person goes in the middle of the circle as the Samurai. The Samurai is blindfolded and clothespins are attached to their clothing. They are then given a half a noodle to tap people with during the game. The group stands in a circle that is at least 15 feet across. Everyone on the edge of the circle is safe as long as they are on the outer circle.

An adult goes around the outside of the circle and taps a few random people to try to sneak up on the samurai and steal a clothespin from them and get back to the outside circle without getting tagged. The Samurai tries to tag the attacker, with the noodle, when they think they hear someone sneaking up.

The key: no one is allowed to show their teeth while speaking. If they do, they are out!

One player is chosen as the captain. They call out orders to the rest of the players who are the crew. If a player does not follow an order correctly, they are out. (This decision is made by the captain, who is always right!)

Determine how many orders you are going to use, and pre-select them based on the age of your players. The more orders you use the harder the game becomes and the easier it is to make mistakes.

Alternative Rules: If playing in a pool, all of the orders stay the same except for “hit the deck” which becomes “walk the plank.” This means that crew members must bob underwater. To make the game less competitive, players do not get “out.” Instead, if the captain notices that they do not follow an order, they must stand out for a count of 20.

Designate boundaries. One player has a rubber chicken. Another player is “it.”  When an “it” player is about to tag another player, that player yells “TOSS ME THE CHICKEN.” If that player is tossed the chicken, they can’t be tagged.

You can only move when the person who is “it” is not looking. “It” will stand behind the water bottle and turn their back to the group, when they count down 1-2-3, that’s when they face the group again.

The team must freeze when “it” is looking at them, if the person who is “it” sees anyone moving they’ll call them out and send them back to start.

This is a high-energy game that is great for an active group of kids. Have participants find a partner and give each person a half noodle. Explain that each pair will be fencing against each other and in good fencing etiquette they acknowledge their opponent by raising their noodle vertically in front of their face and then bringing it down quickly to their side. They then get in fencing position with their noodle extended toward their opponent and touching their opponent’s noodle.

One player says “On Guard” and this signals the beginning of the round. The object is to hit their opponent below the waist. For each hit below the waist the player gets one point. The first player to reach 10 points wins the round. Once the round is won have the players bow to each other out of good sportsmanship and then move on and find new partners.

We hope you found a game or two (or 11!) in our list to play with your campers. Or just to play. Camp games don’t have to stay at camp!