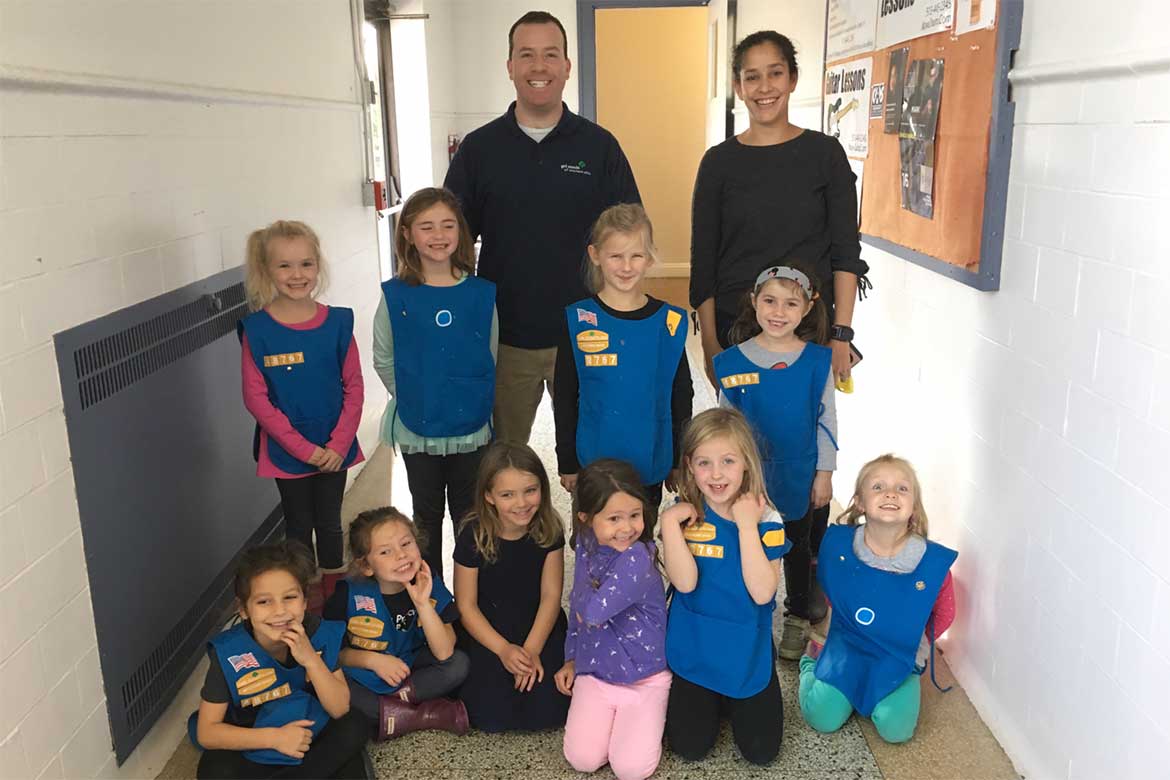 The Importance of Showing Up: How Girl Scouts Changed Our Family’s Life, and What Being a Dad Troop Leader Means to Me

When someone asks me how I became a Girl Scout Daisy troop leader, I always answer: “By accident.”

In early 2018, my marriage ended, and the split was tough for our daughter, Geneva. Geneva was lonely and I felt powerless to ease her pain. Then I got an idea.

At the time, Geneva was enrolled at a very small school and hadn’t made many friends. I wanted her to transfer to a bigger school for first grade. A bigger school meant more community and chances at friends. But seeing as she was undergoing great shifts in her life already, another big change could be risky. It had to be done right.

I called up the new school and explained my plight: My daughter was in another school for kindergarten, but would transfer next year in first grade. I asked: What can I do this year to get my daughter involved with the current kindergarten class, so she can get to know the girls now and not be an outsider when she enrolls next year? There was only one promising option: When the kindergarten forms its brand-new Daisy troop, Geneva can join.

Here’s the thing: These things I discuss—joining a Girl Scout troop, transferring schools, making friends—probably sound like nothing to most people. But to Geneva and I, they were everything. I felt the best way out of Geneva’s struggles was friends and community; to get that, we needed a bigger school and to be actively engaged in new social circles. To get that meant Geneva interacting now with the kindergarten girls because she would be one year behind the current class. And to do that meant joining Girl Scouts—our only and best option to break into this new tight-knit community.

I showed up to the initial parents’ meeting. The representative from Girl Scouts of Western Ohio asked: “Who are the two troop leaders?” One mother raised her hand, and then … nothing. No other hands went up. Nothing but awkward silence. Without a second adult, this troop was not happening.

I waited months for this troop opportunity, and it was seconds away from disappearing.

Desperate, I raised my hand. “Can men be leaders?”

And that’s how that happened.

The meeting ended, and I approached the mom leader. “I am a placeholder, nothing more,” I said. “I need you to find another mom to take my place.” After all, I was a man, and assumed that meant I couldn’t be a true Girl Scout leader—let alone an effective one—since I’d never seen a man in the role before.

Weeks went by, and no second leader stepped up. Early on, I was barely involved, still thinking myself a placeholder. Our first meeting? I wasn’t even there; I was visiting friends out of town. Our second meeting? I was there, but didn’t know any of the girls’ names, and they didn’t know my name.

But everything slowly changed during that first winter. I put in work. I started contributing to meetings. I ran the inaugural cookie drive. I sent reminder emails out to caregivers about to-dos. I started talking about my role as a Daisy leader with a small sense of pride. I saw my difference as a unique thing, not something to hide from. (I always tell people that I just kept showing up—month after month—to show the kids and parents I was committed to the role, and to what the girls were learning from being a part of something that would have a lasting impact on their lives as well as the lives of others.) I worked together with my fellow troop leader, Miss Diana, who is amazing, and the heart and soul of our group. The girls befriended Geneva and played with her at meetings. I still remember the first time a Daisy walked up to me and hugged me. That was progress, and every little bit helped. My daughter and I bonded; she proudly proclaimed to strangers and friends alike how I was her Girl Scout leader. By the end of the year, all the Daisy parents knew Geneva and I. At our last meeting in year one, a quiet Daisy handed me an envelope. I opened it later, and, written in crayon, it said, “Mr. Chuck, thank you for being our Daisy leader.” I’m not gonna lie—I absolutely bawled.

The progress was real, and it was great. But it wasn’t perfect or easy. Serving as a troop leader is tough work, and some of it is thankless. And I while I kept texting parents asking for playdates between their daughters and Geneva, nobody said yes during year one.

Only time and perspective showed me that Girl Scouts was the foundation of everything we slowly created. Girl Scouts engineered a pathway for friends and community that Geneva and I needed. Without it, we would not be where we are now—happier, and with a deeper bond to each other as father and daughter. I now understand that by volunteering with Girl Scouts and stepping into something new outside my comfort zone, I am echoing what we teach our Daisies about courage, confidence, and character—and reaping the rewards of those efforts. My misguided thinking about who I could be was incorrect.

I wanted to write this essay to thank Girl Scouts for giving my small family a pathway toward community and happiness. I feel indebted. If anyone reading this ever needs a resource or ambassador to talk about the dad / male leader experience, or the journey of being a Girl Scout volunteer, I am here.

And Geneva? She’s never lonely anymore—not even close. Thank you, Girl Scouts, for everything you do.

Chuck Sambuchino is a professional editor, author, and coach for writers entering into the publishing world. He is more than happy to help any fellow Girl Scout volunteer, dad or otherwise.